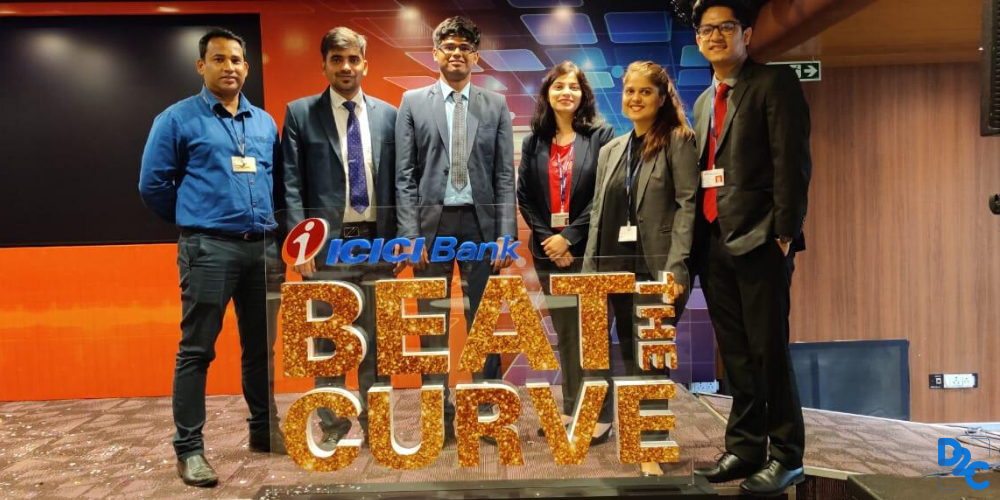 From the beginning of the campus rounds, we focused on the aspect of bringing the youth’s (millennial) perspective to our case solution. For the competition, ICICI Bank Beat the Curve 2019, we chose to suggest an innovative product that will help attract the people from 20 to 30 years of age towards the services of the Bank.

We started by gathering a lot of primary data by getting responses from more than 1000 individuals of varied age groups and localities. The competition had three stages – campus round, Stage 2 (semi-final) and a Final round. We spent close to 20 hours on the semi-final and the final rounds. The mentor-ship provided during the semi-final round was particularly very useful. There we understood what aspects of our solution we need to focus upon.

There were 6 teams who made it to the Grand finale of the competition. They were from institutes like IIFT, FMS, JBIMS, IIM R, etc. During the presentations of the final round, we particularly felt that the team from JBIMS had put in a lot of research in building their solution. But we were confident about our solution as well as the presentation.

Both Shubham and I were part of a winning team even in the first year of our MBA. The experience and learning during that competition certainly helped us here. We had confidence in each other. While preparing for the presentation, we helped each other out in finding faults critically and correcting each other.

One of us was a late-night worker and the other was an early-bird. Instead of quarrelling over finding a common time to work, we took it as a plus point. We worked over this across time, building on each other’s work and just cross-checking before submitting the work when we were short on deadlines!

The moments that mattered

The panel of judges was from the leadership team at ICICI Bank. The competition had a unique and amazing judgement criterion. Along with the jury panel, the audience that comprised 50 senior-level executives of ICICI Bank, scored the different teams on 4 parameters. It was based on parameters like research depth, presentation quality, innovation of the solution and the QnA round.

One key learning in this competition was that the delivery of your presentation is as important as the hard-work done while building the solution. Also, it is important that you look at your solution from the audience’s perspective. This helps you judge your own presentation before anyone else does!

Well, there were two amazing moments for us. One was during the QnA, where we could justify a question put up by a senior executive sitting in the audience. Later, when we took our seats after the presentation, he came to us and praised our solution. That was really reassuring. The second was obviously during the declaration of results when our team, ‘Team Ideates from IIM Kashipur‘ was announced as the National Winners of ICICI Bank Beat The Curve 2019 and we were called on stage!

The team comprised Chirag Dixit and Shubham Kumar. While Shubham believes in working late night, Chirag is an early-bird. The duo had won a competition in their first year as well.

This is how IITs have stepped up to fight Coronavirus

The edgy walk of Placements at IIM Nagpur | Abhishek’s story

Godrej LOUD 2019 is all about making your dreams come true...

Nitish Chandra - SCMHRD Pune - September 12, 2019
0
Since Godrej LOUD 2019 is all about passion, my strategy was to show a clear picture of my dream and idea.  It has inspired...

D2C Editor - December 12, 2016
0
Continuing with the journey of the previous year Hero MotoCorp has come up with yet another season of Hero Campus Challenge (HCC) this year....

Fighting the case battle against all odds | National Winners of...

Team Symbi Ideators - SIBM Pune - November 25, 2019
0
We did intensive research, backing every statement with logic and made sure that what we suggest is not already offered by the company. We...

Jay Bhargav - KJ SIMSR - May 20, 2019
0
The grandness of HUL Big Brand Theory was something that we were coming to terms with when another 'Big Moment’ happened. We became the...

Harshita Baid - IIM Indore - November 14, 2018
0
It was a matter of great privilege for me to know that our hard work has finally paid off as we were declared the...