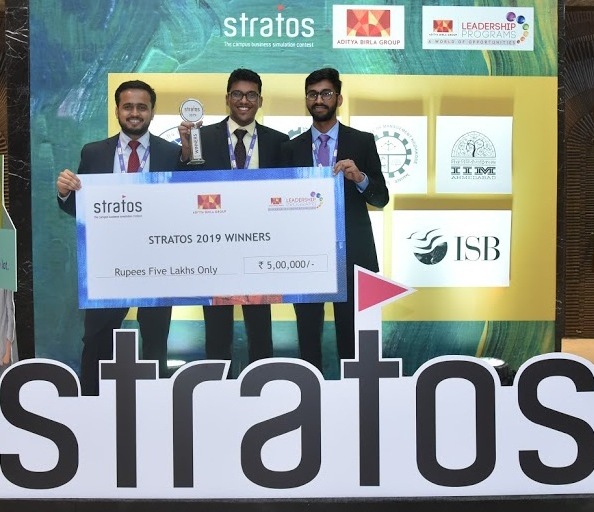 Aditya Birla Group’s Stratos is one of the most reputable case competitions to take part in. Bagging and adorning the title of the National Winners of ABG Stratos 2019 was nothing short of a dream come true.

Consisting of many rounds, the entire process was designed in a way that could help them filter the best out of the teams. The case given to us was based on grounds of a real-world scenario. It made us think about the ideas that could actually be implemented.

The team and the master-plan

Our strategy was to keep it simple. We focused on the 2 ideas that we had initially conceptualized and built on them throughout the competition. We gave a lot of importance to the implementation and feasibility of our idea. In addition, we performed market research to understand consumer perception and buying habits. The lack of industry knowledge and no prior exposure to the insurance sector did create a few roadblocks. But we sailed through it all.

Over almost two months we learned a lot about the insurance sector. We understood how technology is disrupting almost every industry and how we can leverage these tech platforms to grow a company. While brainstorming for new ideas, we also learned that there are still a lot of areas unexplored in the industry and how a simple idea can help you make a lot of money.

Our team consisted of individuals from diverse backgrounds. We were friends even before the competition took off which helped us bond better. We stuck together throughout the competition. The 3 of us played with our strengths and ensured that the difficult moments in the competition brought out the best in us. We did not have conflicts in particular. We freely offered criticism to one other and each one of us accepted it in a positive light.

10 teams made it to the finals. Amongst the teams that reached the finals, the fellow ISB teams were our toughest competitors. This was because, like us, they had come to the B-School with prior work experience and considerable exposure to the corporate world.

The competition framework was very professional. There were no glitches whatsoever, timelines were kept and the problem statement was quite clear. The judgement quality was also good as the best teams made it to the finals. The final round was judged by the top management of ABHICL. That was probably the best panel the competition could get. Aditya Birla Group, in the finals, proved to be incredible hosts in every regard. We also got an opportunity to interact with the top management of Aditya Birla Health Insurance.

More than the joy of winning the competition when our names were announced, we were speechless to see the happiness of the entire college when we got back. It was that moment which made us realise that being the National Winners of ABG Stratos 2019 was a huge achievement for us. It was a humbling experience, one that I will cherish throughout my life.

The team from ISB comprised of Abhishek Khandelwal, Matthew Dilip John and Raj Praveen. Where Abhishek is a businessman who is great at simulations and helped them ace the initial rounds, Raj has a fascination for technology and product design. Matthew, on the other hand, is a Software Engineer skilled in Microsoft Excel, Teradata and Financial Analysis.

How to turn aspirations into reality? | D2C Competitive Leader 2020...

Mayank Khatri -MDI - April 10, 2020
0
A strong work ethic, a professional demeanor, and a commitment to continuously build his knowledge, this is how one can describe Mayank. Whether it...

Jinal Shah - ISB Hyderabad - March 14, 2019
0
We were standing there holding our breath, never being over-confident about winning the title yet never underestimating our spirits and hard work. They said...

Team Zen Coders from KIIT talk about their experience as National...

Team Zen Coders - KIIT - November 6, 2019
0
Reaching the Grand Finale as National Finalists of Philips Code to Care Challenge 2019 was more than a dream come true for us all....

Team Coffee House - IIM Bangalore - March 30, 2020
0
In the battle of creativity and research, let's discover how the team Coffee House earned the tag of the winners of Flipkart Wired 2019...

Aditya Nambiar - SCMHRD Pune - April 22, 2019
0
Reliance T.U.P 4.0 is a megalithic competition organized by one of the largest conglomerates Reliance Industries Limited. Reaching the national finals in its 4th edition was...

Rohith Kumar Karwa - MDI Gurgaon - April 10, 2019
0
We were exultant to be the National Finalists of Colgate Transcend 2018 as we had put in a lot of efforts at every stage...