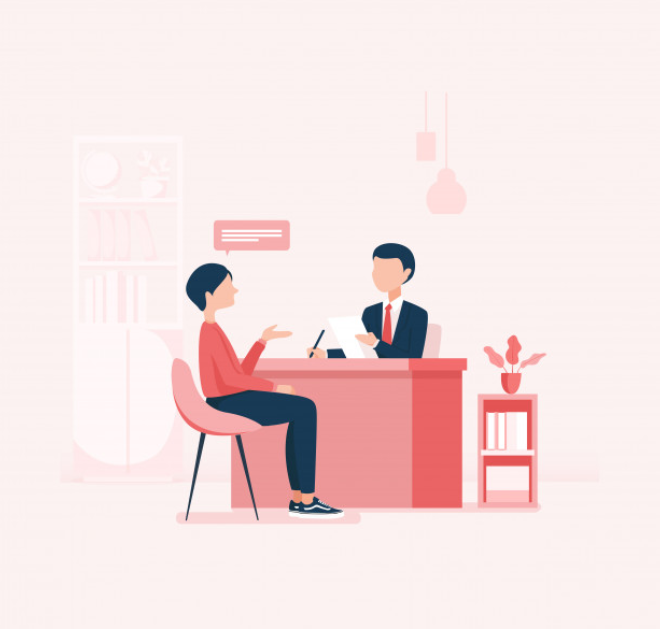 Tick-tock, tick-tock. The second’s hand is moving at a ruthless speed. A minute passes by and then two. Three, maybe? You clearly have lost track of time. Quietly, hands tied below the desk, you wait for the interviewer to let you go. Tick-tock, tick-tock. An infinity later, after several disappointed looks, you’re allowed to leave. Relieved to have left the dreaded room, you finally breathe. Because you weren’t able to answer, the ten minutes of the job interview session seemed like a year.

But what, precisely, went wrong? The fact that you couldn’t answer or the primary reason why you weren’t able to communicate? I guess, both. Where the latter governs the interview primarily, the former is a mere implication of the latter. In simpler words, effective communication is the key to driving a job interview smoothly.

While practice is what will bring you closer to perfection, we have a few tips to help you communicate effectively.

Nervousness and anxiety are two major evils which grip you once you start speaking about yourself during an interview. To fight them back, you need to calm yourself down, breathe and speak clearly. You might be tempted to utter everything out in a single breath, but that’s exactly what you aren’t supposed to do. To build a connection with the interviewer and ensure that he/she understands what you’re trying to convey, talk slowly. This also reflects how much you really are interested in the interview and the company.

Communication, always, is a two way process. Even though it is mandatory for you to express yourself well, you also should listen carefully to what the interviewer has to say. This, indeed, will help you answer better. You’ll also get a clearer picture of the recruiter and the company, which you can later use to your advantage. Look for loopholes to get an idea of the skills he/she is looking for. You can then mould the interview in that direction. Also, do not think about the response while the interviewer speaks. Pay attention to minute details before you start answering.

Where your profile and knowledge play a vital role in defining your candidature for the given role, your body language plays a crucial role too. To leave a lasting impression on the recruiter, make use of the non-verbal communication effectively. Stay confident and do not appear distracted. You will have to stay attentive. Let the interviewer know that you’re genuinely interested in getting hired. Push all negative thoughts aside and breathe. You will pave your way through this!

There are instances, during the course of an interview, where you can discuss personal topics, ones which have helped you build your skill-set. Once you start talking about your journey, you’ll be able to express yourself better, in addition to illustrating your skills and experience. Pay attention to the details to know when you can pitch your personal information in.

Staying alert and preparing beforehand can help you perform better. However, the above set of rules do not define the bandwidth of the interviewer’s questions. While you can never be entirely sure of the questions that’ll be hurled at you during the job interview, you can always make the best use of the skills you already possess. Set your fears aside and gear up for the D-Day. Good luck!

Admission procedure at XLRI for its PGP batches of HRM, BM, and PGDM

How to keep your Employees Engaged in 2018?

D2C Editor - August 7, 2018
0
The biggest issue that employers are facing is the volatility of employees and it has become a daunting task to keep the employees fixed...

5 Leadership And Management Lessons From The Game Of Thrones

D2C Editor - June 18, 2019
0
No clear protagonist? Check. A lot of politics and bloodshed? Check. Regularly killing off the characters you were rooting for? Check. Still managing to...

D2C Editor - July 6, 2018
0
Practicality has its own benefits as it provides direct insight into the talents of an individual. With companies being more focussed on hiring prospects...

Quizzing Industry of India and Its Evolution Through Time

D2C Editor - September 7, 2017
1
The word ‘Quiz’, as a tale goes, originated in Dublin. Created by a theatre manager in order to win a bet that required him...