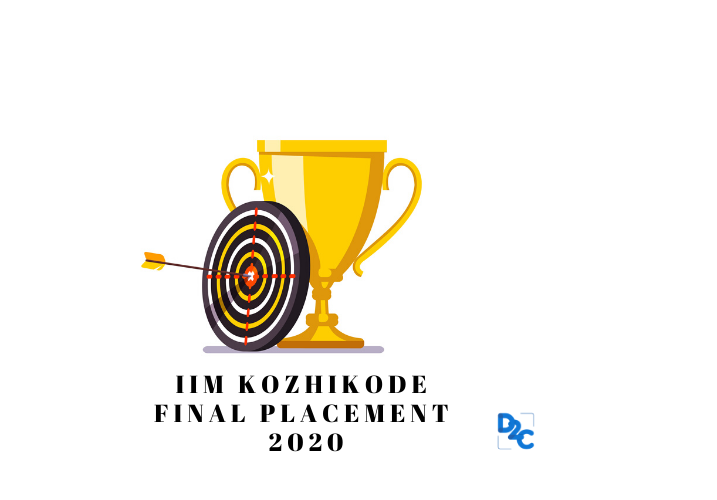 IIM Kozhikode is breaking its own record year on year! A sharp upward trend can be seen in the IIM Kozhikode Final Placement 2020 with a 22.4 percent rise in recruiters participation, a 12 percent increase in the mean and a 12.4 percent increase in the median salary as compared to the last year. The top 5 percentile bagged a mean CTC of INR 40.66 LPA followed by a mean CTC of INR 31.38 LPA by top 25 percentile and INR 26.69 LPA by top 50 percent of the participated students.

Let’s take a quick recap of the 5-day drive which witnessed a cent percent placement of students by 131 recruiters.

To combat cut-throat competition and for devising efficient solutions, the recruiters hired consultants in the first place which is clearly indicated by the highest number of offers rolled out by the consulting sector. However, the sales and marketing sector retained the tag of the highest paying domain in the final placement.

GE Healthcare, HUL, Lenovo, Maruti, Bajaj Auto, Philips, ABFRL, Asian Paints,  Pidilite, Samsung, Sony Pictures, TATA Sky, and Tolaram Group among others recruited a large number of students to be a part of their team. This domain saw a remarkable increase of 20 percent in the average CTC as compared to last year.

This sector held the lion’s share in the recruitment process with an average CTC of INR 23.75 LPA and highest salary of INR 34.36 LPA. Big-names like Deloitte, Accenture Consulting, Accenture Strategy, EY, Infosys Consulting, Optum, PwC, and ZS hired some of the brilliant minds into the consulting world. Besides this, Bain & Co. and BCG solely made 15 offers.

This remained the second-highest paying domain with the highest CTC of INR 50 LPA. Prominent recruiters like Microsoft, Myntra, VMware, Cisco, Citrix, JDA, and Wipro offered more than 40 percent of their jobs with the designation of a Product Manager. Other big conglomerates like American Express, Google, Gramener, IBM, Sabre, WorkIndia also pitched in the IM Kozhikode Final Placement 2020.

New-entrants like Blackbuck, Bounce, Cloudtail and Udaan offered multiple roles in the placement drive. This sector attracted an average CTC of INR 28.98 LPA and highest CTC of 40.50 LPA, thus marking an increase of 19.50 percent in the mean CTC as compared to last year. Other prominent recruiters include Amazon, Flipkart, Ninjacart and Uber.

IIM Udaipur Summer Placement a step in the right direction

SPJIMR jumps the gun by wrapping up its Final Placement |...

D2C Editor - January 2, 2020
0
SPJIMR's PGDM Class of 2020 had a stellar performance amid worries of a rough year for B-School placements. These worries were laid to rest...

D2C Editor - May 14, 2019
0
It was a mixed year for FMS Delhi placement. There was a dip in the highest salary but each of the participating students was...

How Team Indigo’s focussed approach lead them to the finale of...

D2C Editor - January 11, 2020
0
Our team comprised of three members. The diverse background of our team helped us in refining our idea. The best part about our team...

The biggest batch out of all IIMs takes care of business...

D2C Editor - December 19, 2019
0
For the biggest IIM in terms of batch strength, this edition of the IIM Indore summer placement drive was the perfect stage to showcase...

D2C Editor - May 14, 2019
0
SIBM Pune placement had a good season placement in 2019. Both the average and highest salary spiked up. The average salary increased from...