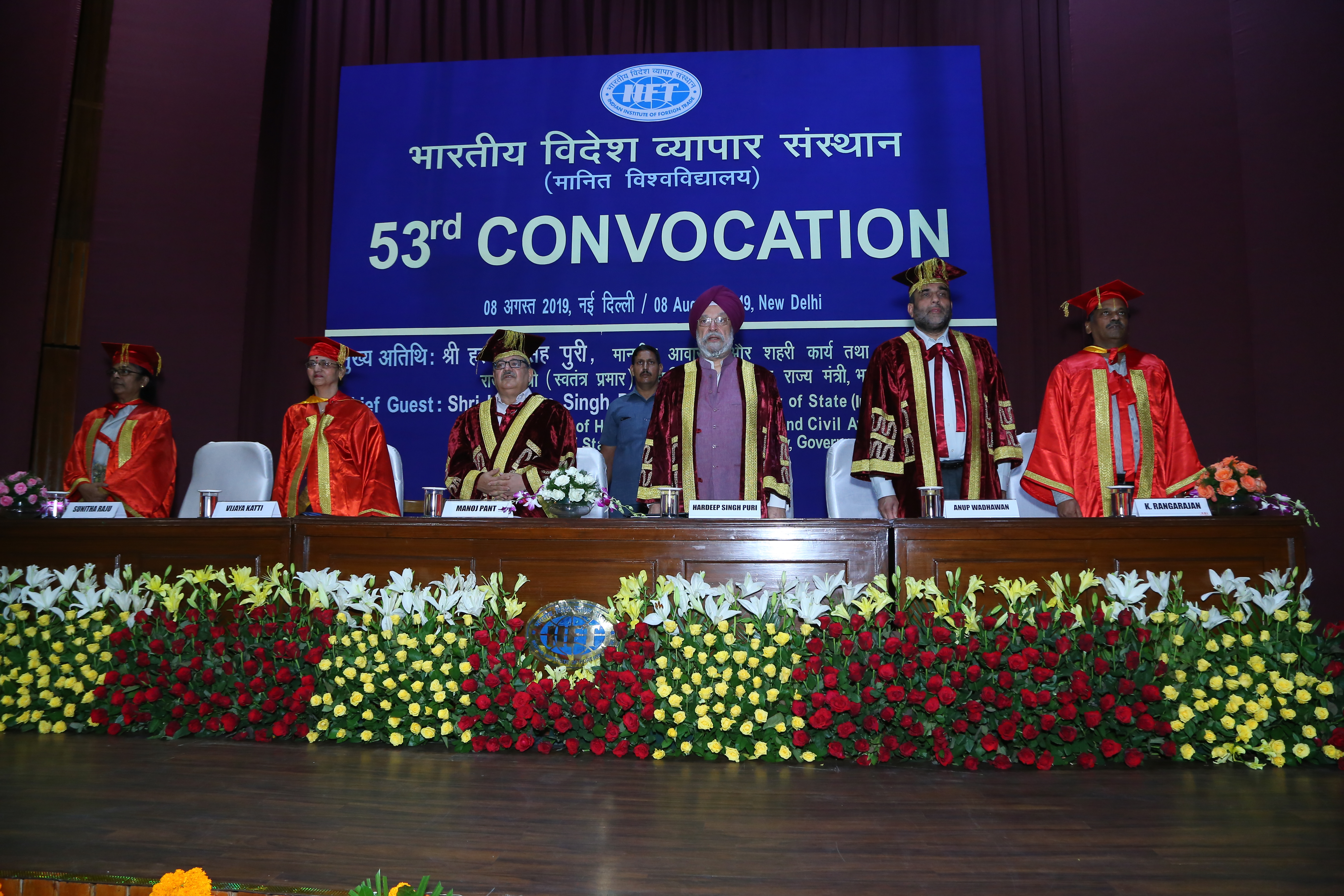 The Indian Institute of Foreign Trade (IIFT) commemorated its 53rd Convocation at its New Delhi campus on August 8, Thursday. In an impressive ceremony, the Chief Guest, Shri Hardeep Singh Puri, Hon’ble Minister of State (Independent Charge) of Ministry of Housing & Urban Affairs, Civil Aviation, and Commerce & Industry, awarded degrees to graduating students of the class of 2018.  Moreover, degrees were conferred for PhDs, full-time MBA, Weekend MBA programmes, EPGDIB, and CPEIM courses. Distinguished members from Board of Management of IIFT, faculty members of IIFT and other dignitaries graced the function.

Shri Hardeep Singh Puri stressed on the commendable growth that Indian economy has witnessed since the last few decades with the GDP touching a commendable figure of  $ 2.8 trillion USD. It has brought India to a level playing field with major economies of USA and China. Considering the contribution of the external sector to the tune of approximately 50% in this economic growth, he focussed on the growing importance of specialized institutes like IIFT.

He appreciated the strong contribution of IIFT’s research-based consultancy and corporate training. Also, he hoped that the institute would contribute towards building India a 5 trillion USD economy by 2024, growing further to 10 trillion USD by 2030.

While congratulating graduating students for their future, he advised them to keep abreast of the latest developments in foreign trade.

He further acknowledged the strong role of IIFT towards extending a helping hand in policy making through its newly established Centre for Trade Facilitation and Logistics (CTFL), Centre for WTO Studies, Centre for Research in Trade (CRT), Centre for Trade and Investment Law (CTIL) and Centre for NE Studies (Ce-NEST) at IIFT Kolkata. He also promised continued Government support to the institute for its upcoming campus at Maidan Garhi.

While presenting the Annual Report, Prof. Pant recounted the journey of IIFT through expansion, extension and benchmarking in foreign trade. He said, “IIFT has been a landmark institution that is not only a leading B‐school in India but also a major think tank of the country. It is also a widely recognized Centre for Human Resource Development and a hub for research in International Trade and Finance.

In the last few years, IIFT has produced over 10,000 professionals and trained more than 40,000 people in various aspects of international business and trade.”

While addressing the audience, Prof. Pant thereafter announced that IIFT is all set to join an elite league of B-schools globally consisting of around 845 B-schools with a coveted AACSB accreditation with only 10 such in the country. All this has been possible with the dedicated support of IIFT fraternity in three prime areas; training, research and highly professional teaching, leading to a proud attainment of 100% placements in the shortest possible time with an average package of approx Rs. 20 lakhs per annum with few students crossing a bracket of Rs. 1 crore with offers pouring from across the domain; right from consulting, FMCG, BSFI, S&M, Trade, Operations, Supply Chain and IT.

D2C Editor - October 30, 2018
0
Everyone deserves a pat on their back for the good work that they perform. For this reason, Awards has been bestowed to the deserving...

D2C Editor - January 18, 2020
0
MICA offers two post-graduate programmes which are PGDM and PGDM-C. For admission to the batch of 2020-22, students have the option of choosing between...

It is the time for INNOVATION or Switch

D2C Editor - June 6, 2018
0
“Excess of anything creates an imbalance.” This proverb quite rightly fits the condition of the B-schools, with more than 100 of them shutting this year...

D2C Editor - May 21, 2019
0
Shailesh J. Mehta School of Management - SJMSOM IIT Bombay Placement had a successful process with all the students getting placed during the days...