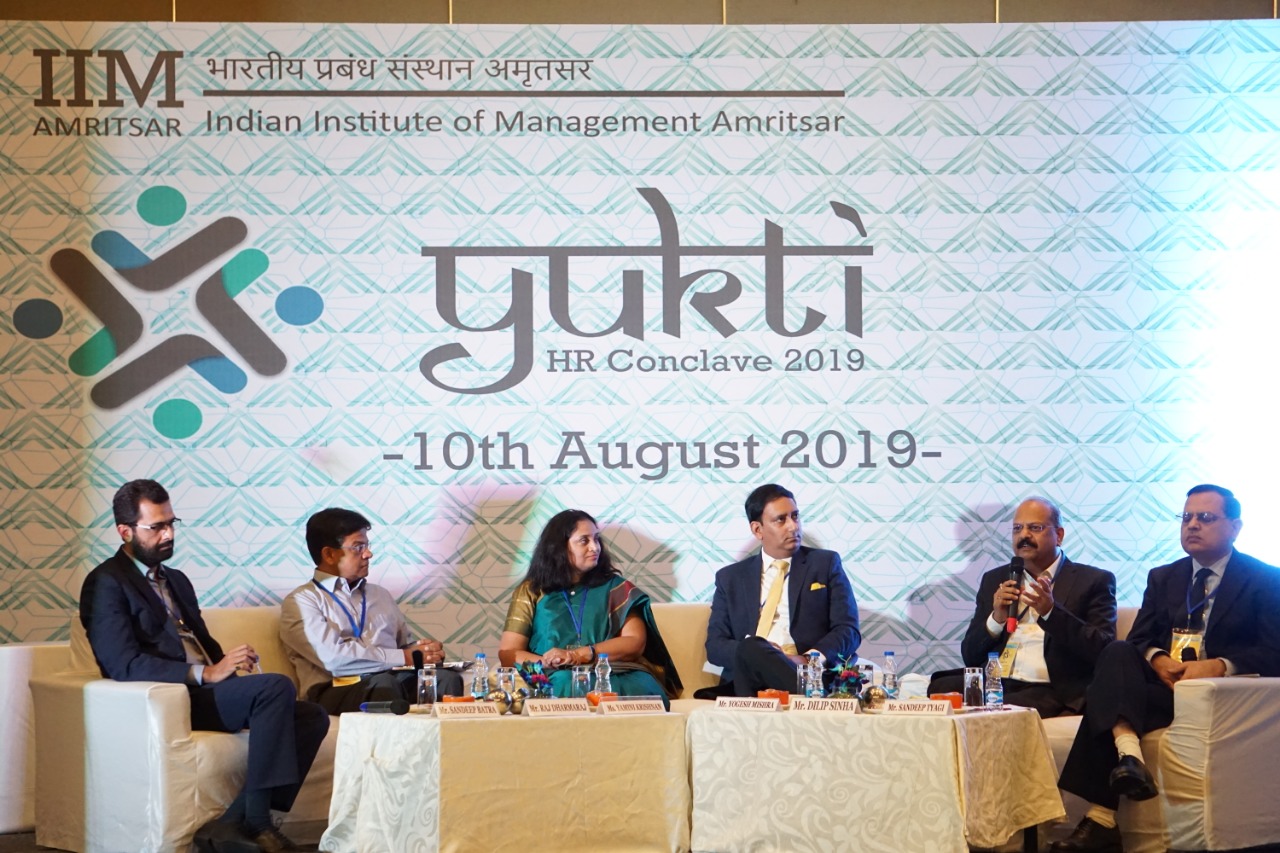 Indian Institute of Management(IIM), Amritsar has successfully conducted the fourth edition of its annual HR Conclave, Yukti 2019 on Saturday. The event witnessed well-known HR experts from various industries across the country having perceptive discussions on different aspects of Human Resource. The industry experts came together and discussed the importance of this digital age and provided thoughtful and factual insights on various contemporary HR practices and potent possibilities.

The theme of the first discussion was ‘Challenges and Opportunities in Employing Gig workforce in India’ and for the second discussion was ‘Accommodating Gen-Z in the modern workplace’.

Yukti 2019: Challenges and Opportunities in Employing Gig workforce in India

The Yukti 2019 commenced with the lighting of the lamp. Prof. Nagarajan Ramamoorthy, Director, IIM Amritsar welcomed the esteemed panelists. He was glad to host the first conclave as the first full-time Director of the institute. Also, he recalled his life at XLRI Jamshedpur as an MBA graduate, where he realized the difference between academic knowledge and what experience taught him.

The challenges, innovations, and strategies are totally different. He added that the nature of the workforce has changed drastically in both India and the USA. The industry is progressing at a furious pace and the challenges will be different in five years. Moreover, he encouraged the students of IIM Amritsar to gauge and understand the perspective of the industry stalwarts.

The rise and prevalence of gig workforce in India

Introducing the theme for discussion, IIM Amritsar students delivered a few presentations on the themes of the Yukti 2019. They briefly introduced the audience about the rise and prevalence of gig workforce in India and how Gen Z is being accommodated in the modern workplace. The first team of presenters comprising of Mr. Sambhav Jain and Mr. Rahul Sehgal of PGP05 informed the audience that the gig economy has been expanding and making inroads through conventional organizational setups.

Whereas, the second team of presenters comprising of Mr. Rishabh Parakh and Mr. Mohit Dugar of PGP05 talked about how modern workplaces are updating their policies and practices to accommodate the incoming Gen Z employees.

Mr. Prashant Srivastava moderated the first session. He began the discussion by posing a question before the students. He asked how many students would prefer to get a healthy salary at the beginning of each month. Also, he asked who else were willing to become gig workers, sell their skills and work for new employers.

The challenges of the gig economy

Mr. Prashant highlighted the challenges of the gig economy and raised the question of self-actualization among the workers based on Maslow’s hierarchy of human needs. The challenge also lies in the differing mindsets of the employees and the employers. As corporates, their mindset is American while the employees have an Asian mindset.

Mr. Rajendra Mehta began by demonstrating that the practices that originate in the USA, when introduced in India shall definitely thrive and become successful. The cities of Delhi and Mumbai have a large base for gig workforce. The momentum will continue to build and propagate to the other large cities with a population greater than Rs. 1 crore. Moreover, he said that the gig economy is typically the ‘uberisation’ of skills where spare talent can be utilized for cost optimization.

Mr. Bikram Naik said that the common thinking is to associate gig with delivery boys and drivers, and this is how the gig economy actually originated. Moreover, he said that the underlying thought is to realize that the low skill range workers like cab drivers are working for technology-driven companies and are getting habitual of the technology. This will definitely lead to sustainability of the gig economy in the long run.

In addition, he also emphasized that the gig workers are essentially ‘engaged’ and not ‘hired’ which potentially adds to the win-win scenario. While recalling an engagement opportunity offered to an air hostess, he realized that social security and loneliness are primary challenges faced by gig workforce.

When people began selling their skills for short-term assignments

Ms. Sonali described how for existential purposes in the USA, people began selling their skills for short-term assignments. Moreover, she asked the students to ponder that as a social fabric of the nation, whether we are ready for a gig economy considering the security and kind of opportunities that are available. The huge psychological safety net that the corporate setup provides to permanent employees is definitely a challenge for a gig economy. Also, she added that the kind of preparedness that corporate needs to have to recognize, understand and accept the new culture of gig workforce is the question to be answered.

Dimensions of the gig economy

Mr. Vivek Tripathi discussed how unlike a permanent setup, the gig workforce is rewarded for their time and the deliverables they are expected to produce. He threw light on the various dimensions of the gig economy. Some of the dimensions being degree and rarity of skills, your presence at a particular location and the individual’s capability of performing a task from any part of the world. Moreover, he said that the advantages of the gig economy are the control over timing, flexibility, and freedom from organizational policies which encourage the workforce to engage in areas of deep interest. The disadvantages are lack of predictability of income and lack of safety net.

Mr. Sameer Mathur recalled his experience with an intern and beautifully placed the requirements to become an industry leader. He brought a traditional perspective to the table. He was in the support of fixed income, a fixed mindset. If an individual wish for healthy growth and aspire to become an industry leader then gig economy isn’t the way ahead. Also, he said that expenses have shot up and lifestyles are continuously transforming with time. To fulfill these needs one needs to have the assurance of salaries on time and work bonuses.

Moreover, peer coaching and mentoring from seniors is the luxury of permanent employees. Nevertheless, there is a need to fundamentally follow the gig economy and see how it pans out in the near future.

Mr. Sandeep Tyagi was the moderator for the second panel-discussion. He began the discussion by telling how Gen Z will bring transformation and how scenarios will develop when they enter the workplace. He said that 30% of Gen Z and 40% of GenY will eventually constitute 70% of the workforce in the next year. Most of the workforce would then constitute people who were born after 1980. The arrival of Gen Z spells a huge paradigm shift for the corporate world. The attitude and skills they bring to the table will be an opportunity and a challenge for the industry.

The changes in the telecom industry

Mr. Sandeep Batra discussed the changes in the telecom industry and how it has transformed from being a general industry to a specialized industry. The fear of missing out has prompted the various organizations to keep pace with the technology. Regarding Gen Z, Mr. Sandip said that they are born with the clarity of being in the digital world. Their alliances online and offline make them seamless. In addition, he said that Gen Z does not appreciate or respect the hierarchy levels. The expectations of Gen Z are realistic and they want their promises delivered within a timeline.

Mr. Raj Dharmaraj discussed the ways to engage and motivate Gen Z. One of the hallmarks of Gen Z is inclusion and diversity. They look out for employment brand and appreciate the culture of inclusion and diversity in an organization. Also, he said that Gen Z always looks out for larger meaning and purpose. He talked about the changes that need to be brought in the traditional model of HR policies. He talked about a shift from individual performance management to collective performance management. Moreover, he also talked about the constant feedback system as opposed to a yearly feedback mechanism.

Ms. Yamini Krishnan talked about how the panelists began their careers from paper-based models and graduated to dial-up connections at home. On behalf of her organization, she said that companies have to set expectations and give clear career paths to Gen Z. In terms of opportunities, Gen Z is willing to put in extra hours but is wary of seeing themselves cut off in their personal lives at the same time.

Dr. Yogesh Misra modified the theme of the discussion and urged that as a recruiter he would discuss on ‘Embracing Gen Z in the modern workplace’. He emphasized on the two perspectives of larger societal changes and the organizational changes while addressing Gen Z, keeping the impact of social media in view. He said that in today’s world a consumer prefers the convenience of purchase through e-commerce websites.

Moreover, he said Gen Z would also have a similar consumer-like behavior when they would enter the industry. It has resources to compare through Google and hence professors and bosses are expected to be original and authentic.

Mr. Dilip Sinha talked about how jobs are getting lost and some jobs are getting created due to rapid development. Everyone is investing in technology because of a change in business structure to sustain the competition. Also, he emphasized on describing Gen Z as the backbone of development and technology. Moreover, he touched upon three aspects of the ecosystem, functional engagement and behavioral dynamics in an organization to accommodate Gen Z.

The students of IIM Amritsar showed great enthusiasm during both panel discussions during Yukti 2019. The discussions were highly interactive followed by a healthy Q&A session between the panelists and students.

ABG Stratos 2019: Everything that one needs to know

D2C Editor - July 15, 2019
0
Stratos 2019, hosted by the Aditya Birla Group is its flagship business simulation competition. Test your brains and instigate your thought process with real-life...

D2C Editor - September 13, 2018
0
IIM Calcutta has been ranked 2nd best business school in the country as per Financial Times (FT) ranking of masters in management (MIM) 2018,...

D2C Editor - May 14, 2019
0
IIM Rohtak placement process ended by strumming its all positive notes. The placement rate was a resounding 100%. The average salary went up. New recruiters...

How to crack group discussions for placements

D2C Editor - July 11, 2019
0
We all love to discuss in groups. Whether over a cup of coffee or in the college canteen, discussions play an important role in...

D2C Editor - October 30, 2018
0
Everyone deserves a pat on their back for the good work that they perform. For this reason, Awards has been bestowed to the deserving...